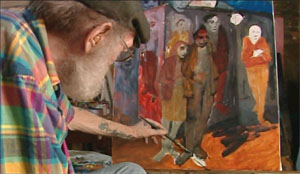 Derroll is in his studio, painting and talking:

Now let’s see what kinda’pink I can get here... Fool around here a little bit... and maybe turn out to save’m... Beautiful face... Though I hadn’t counted on that one... and…”

“When I was in the Navy, I never thought of becoming an artist or a painter. My mother was on that kind of thing. But I only thought of one thing: when I get out of here, all I want to do is just paint! So that’s why I went to art school. I was thinking of terms of not so much being an artist myself. I didn’t think I had that kind of ability, but I thought I could be an art teacher”.