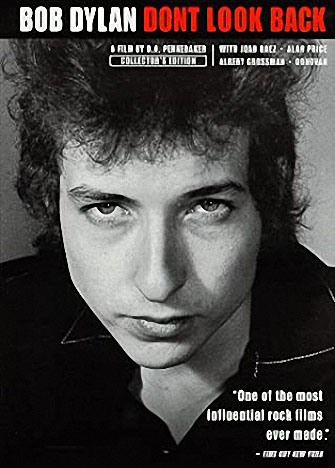 Dont Look Back is a a 1967 documentary film by D. A. Pennebaker that covers Bob Dylan’s 1965 concert tour in the United Kingdom. In 1998, the film was selected for preservation in the United States National Film Registry by the Library of Congress as being “culturally, historically, or aesthetically significant”. The film features Joan Baez, Donovan and Alan Price (who had just left The Animals), Dylan’s manager Albert Grossman and his road manager Bob Neuwirth, Tito Burns and Derroll Adams... [read more at Wikipedia]

The original title of this film is Dont Look Back (i.e., without an apostrophe in the first word). D.A. Pennebaker, the film’s writer (and director) decided to punctuate the title this way because he “was trying to simplify the language”. Many sources, however, assumed this to be a typographical error and swiftly “corrected” the title to Don’t Look Back (i.e., with an apostrophe in the first word).

D. A. Pennebaker’s cinéma-verité film about Dylan’s concert tour of England in 1965, Dont Look Back, includes several scenes of Dylan and his entourage in his suite at London’s Savoy Hotel. In one of them, Dylan squats on the floor amid a gaggle of English folkies and hangers-on, and slurring his words, he converses with Ramblin’ Jack Elliott’s old recording mate Derroll Adams, who had relocated to England and who suggests that they get together “and I’ll turn you on to some things.”
“Okay. Are there any poets like Allen Ginsberg around, man?” Dylan asks.
“No, no, nothing like that,” Adams replies. He pauses for a split second. “Dominic Behan.”
“Hey, yeah, yeah, you know, you know,” Dylan says, then the name sinks in and he sounds repulsed. “No, I don’t wanna hear nobody like Dominic Behan, man.”
Dylan mutters the name again, contemptuously, “Dominic Be-un.” A sodden English voice, off camera, spits out: “Dominic Behan is a friend of mine…”
“Hey, that’s fine, man,” Dylan says, evenly enough, “I just don’t wanta hear anybody like that though.”